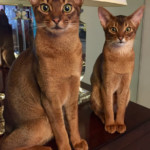 Bay, 4.5 months old and Bloor, 7 months old, arrived in early February 2019 and they have brought us much joy and laughter. We had already owned two Abyssinians and when we were ready for another feline friend, after our beloved Tiberius died at 17, we knew we wanted two Aby kittens. We found Janet’s cattery online, contacted her and quickly decided that we would like to have two PureAbby kittens. The original plan was to adopt litter mates, but when only one kitten, Zak, was available from September’s litter, Janet helped us realize our dream of having two little ones by suggesting we also adopt Declan, who was a little older. Renamed as Bay and Bloor, they arrived together and quickly bonded. They are growing like weeds, happy and very busy — keep your flat surfaces clear! Bay in particular loves knocking pens and pencils onto the floor and together they get endless pleasure from playing with empty cardboard boxes. They are very friendly to visitors and run to meet us at the door when we return from an outing. They are typical Abyssinians — they want to be where you are and in the middle of (or creating) the action. We brush their teeth every day to prevent gingivitis and, like true Abys, once something becomes part of their daily routine, they remind you it’s time to get on with brushing (and the treats). When not angling for treats or tearing around the apartment, they can be found napping on their cat condo or squeezed beside us on our chairs. Most nights, Bloor snuggles under the blankets at our feet and Bay sleeps on top of the bed. Bay is a total love bug and quite vocal; Bloor is affectionate and, like the other Abys we have had, rarely meows. Before we adopted Bay and Bloor, Janet was great about keeping us informed of their progress and since they have arrived she has been a wealth of information and support. She loves to hear how the boys are doing and see photos of their latest antics. Thank you Janet, for raising such beautiful cats.